No Room to Die 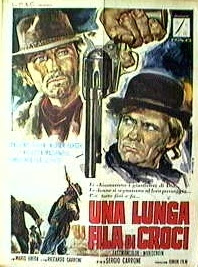 Illegal migrants crammed into wagons, exploited on arrival in their new home and abandoned to die when the risks of smuggling them become too high are all too common realities in current news stories so it is a little strange and unsettling to see these same images and themes at the heart of a genre film from almost 40 years ago. But that is the case with No Room to Die and it gives the film real resonance for a contemporary audience. Resonance it needs because in some other ways the film fails to live up to its sum parts.

Starring Anthony Steffen, William Berger and Nicoletta Machiavelli and featuring the director's brother Riccardo as the key villain and Mario Brega as the hero's sidekick this picture has a number of ingredients which should allow it to succeed without too much effort. The director too is very capable and all in all the setting is right for a first class bit of Spaghetti fun. But although it works in parts and is certainly not a bad effort, this is ultimately a film which doesn't quite punch its weight.

It certainly doesn't lack action. On the contrary, there is an almost constant stream of gunplay throughout and the body count at the end verges on the outlandish. William Berger's six barreled shotgun goes someway to ensure this, while the ruthlessness of the people smuggling gang and the efficiency of Steffen's bounty killer character add more fuel to the bloodletting fire. It also doesn't lack creativity on the visual front. Sergio Garrone was a director who relished the chance to play with framing and camera angles and his work on this film is always interesting. The music score does, however, leave something to be desired and I think its failings in No Room to Die highlight an interesting point about the implicit pleasures of this genre in general.

The Spaghetti Western is a very particular sub genre. It shares many conventions with its traditional American cousin; geographical and historic setting, themes, a mythological nature, big hats, horses, six guns etc etc. But it also has more specific conventions within this wider range which help us identify it as of european rather than American origin and these conventions play an equally important role in satisfying our expectations when we sit down to enjoy any particular film. Large among these specific conventions is a rousing and stylised music score.

The iconic scores of Ennio Morricone are the most obvious examples of 'typical' Spaghetti Western themes but, in truth, there are a number of other composers who contributed excellent scores to a large number of films and whose combined work helped create the sound of the Spaghetti western as we think of it. Composers like Bacalov, Nicolai, Giombini, De Masi and a host of others all played a huge part in making the films they worked on a success while collectively creating a body of work distinctively connected to this genre. In fact it is fair to say that you will not find a single quality film from the Spaghetti Western genre that does not have an outstanding score as part of its appeal. Take a look at any fan's top 20 Spaghettis and I guarantee you will find 20 great scores playing their part in the choice.

This is not so surprising when you consider the parallels between the Spaghetti Western genre and its italian cousin, opera. The operatic tradition in italy is very strong and its conventions influenced heavily the nation's cinema. Motifs for individual characters are used commonly in the same way they are in opera and you don't need to be a major afficionado of the genre to recognise that large parts of the drama is framed within a musical backdrop rather than within an extended dialogue. Music is like a central character in these films and when the music is under par, the wider film suffers badly.

This, I believe, is the main problem with No Room to Die. Vasco and Mancuso's score just doesn't make the grade. It swings between kitsch melodramatic chords announcing moments of menace in almost comic book fashion and instantly forgetable background musings which add nothing to the drama at all. This, when combined with Garrone's genuinely inventive visual style is a real disappointment and detracts from the film's effectiveness to a large degree. A great pity, because the film does have some real positives on offer which, if given better embellishment, could have resulted in a pretty good film all round.

Foremost among the positives is William Berger's performance as the preacher / bounty killer whose enigmatic character is at the centre of the drama throughout. Steffen gets top billing but this is definitely Berger's show. His cold haughtiness is perfect here and well contrasted in moments of ruthless cruelty and violence. This is Berger at his best and the audience is never totally sure as to his motives or loyalties until the very end.

Nicoletta Machiavelli is also excellent here, playing the strong and moral female lead, ultimately at the mercy of the violent men she is surrounded by but never consumed by fear of them or broken by their barbarity. Machiavelli often appeared in this fashion in Spaghetti Westerns (her role in Navajo Joe springs to mind) and as such she is something of a rarity in a genre where women are often portrayed as victims or vamps. Her mix of beauty and strength are used in No Room to Die as a lynchpin of morality around which the male protagonists circle in their struggle to overcome each other and, as such, she is a key figure in the piece.

Ultimately then, No Room to Die is a film with some excellent features which is let down by a couple of major failings. It is decent fun on the whole, and I'd recommend it to committed fans, but it could have been so much better and is more memorable for what is missing than for what is on show.
Posted by Son of Django at 21:39

I enjoyed this review very much and I found your comments regarding the music particularly interesting, especially the description of melodramatic chords. Who helped you with the research and terminology?

Unfortunately I rely on my family for such assistance and their help is patchy at best. I'm fond of them none the less.

Nice review, but I feel Steffen was great in this role as the cool, silent bounty hunter. The movie was cartoonish, but I feel the best SW's are the ones with less acting and more gunplay. Its the cartoonish aspect that make SW's superior over Hollywood westerns