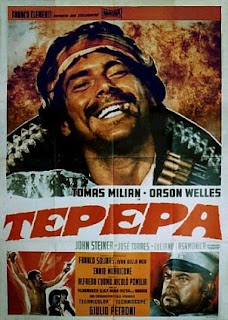 The Revolutionary Westerns that became almost a sub genre during the italian western cycle produced some of the most interesting films of the era. A Bullet for the General, Companeros and The Mercenary are good examples of how the Mexican revolution provided a rich backdrop for the creative talents of the italian commercial cinema's best writers and directors. The tragic political and personal stories which the setting offered led to a more intellectual approach and an end result which was more thoughtful and thought provoking than the average shoot 'em up action flick. Tepepa is possibly the most thought provoking of them all.

Ostensibly this is a story of a Zapata-like revolutionary figure struggling to continue the revolution after Madero has become president but not fulfilled his election promises. Pursued by the army and police as a renegade Tepepa is under threat from all sides. Even the English doctor who saves him from the firing squad only does so in order to have the pleasure of killing him himself. An act he tries to accomplish throughout the film. But Tepepa the film is far more complex than a simple folk hero tale with some explosions and gun battles thrown in.

To begin with, the narrative style of the film is anything but straightforward. Interweaved with the forward progression of the story is a series of flashbacks, recounted memories and eyewitness reports which theoretically flesh out the back story leading up to the present but, in reality, only serve to cloud our ability to identify true events and character motivations. Like a novel with a series of unreliable narrators the film lures us in with one account only to undermind it with the next. Tepepa asks Madero to recall certain events in a letter he dictates to the president, the doctor sees his dead fiance in flashbacks to scenes we discover he never actually witnessed, Colonel Cascorro reads eyewitness reports which are just as likely to have been extracted through torture as freely given and, given the colonel's character, could simply be invented for his purposes. All of these versions of events conflict with each other and we are left grappling for grains of truth we can rely on in a vain attempt to identify the true heroes of the piece. In reality of course, there are none. All the characters here have their own prejudices and are driven by their own priorities. All insist they stand for the common good, but all, to some extent are merely self serving. All, ultimately, are corrupted by whatever level of power they gain and are blinded by their own unwavering view of what is most important.

This is also a story steeped in betrayal. A theme at the heart of the Mexican revolution. Madero is seen as a traitor to the revolution; failing to honour his promises and distancing himself after victory from the peasants who supported him. Choosing rather to ally himself with the army and police who had been their adversaries during the war. But the other characters here, be they central or peripheral, are equally prone to turning their backs on former comrades or making agreements with enemies in order to progress their own cause. Tepepa himself, despite his criticism of Madero, turns his back on Jose Torres' character once he sees he has lost both his hands and is therefore of no use to him and his struggle. Torres, in turn, betrays Tepepa for money to make a better life for his son. The doctor is at least consistant in betraying any trust Tepepa puts in him but we are still taken by surprise by his ultimate act as it betrays not just an individual but the hippocratic oath of his profession too. Finally, the doctor himself is also betrayed by the boy he thought he had befriended for the simple reason that "He didn't like Mexico."

Tepepa then, is not an easy film to watch. It demands more from its audience than simply following a hero through to a happy ending or merely enjoying an action packed ride through the Mexican revolution. Its characters are complex and unsympathetic to varying degrees. Those you are drawn to and wish to think the best of have their weaknesses exposed. And in so doing, shed a less damning light on their adversaries whom it is easy to despise. It is a film which plays with ideas of 'truth' and suggests that, as in Ford's The Man Who Shot Liberty Valance, when it conflicts with 'legend' it is the latter which will ultimately be more palatable.

The artistic personel here are all of the first order and at the top of their game. Petroni, a fine director responsible for the excellent Death Rides a Horse, produces probably the best work of his career here. Morricone's melancholy score is sublime and perfectly fitting for the tone of the film and Franco Solinas' script is proof that his equally meritous work on A Bullet for the General was no fluke. The casting together of Tomas Milian and Orson Welles, although apparently an extremely unhappy personal mix on set, proved fruitful for the viewer at least. Milian plays the charismatic Tepepa with consumate skill; winning us over despite the flaws his character exposes as the piece unfolds, while always maintaining a suggestion of cruelty hovering beneath the surface. For Welles the cruelty is open and unabashed. Although I sensed that the big man was somewhat going through the motions en route to a pay cheque, his slothful greasiness suits his character perfectly. John Steiner's Dr Price is equally well played with a fine combination of british haughtiness and seething, pyschotic rage.

Unfortunately, as is often the case, Tepepa does not have an english friendly international DVD release. The italian Mondo edition which I watched has english audio as an option but this soundtrack is not complete and it's repeated dropping out through the course of the film (some 15 minutes in total) is irritating and off putting for a film that demands your concentration. Unfortunately this is the only complete version of the film available that I am aware of and is therefore, though imperfect, the best option there is. I got over the sound drop outs by keeping the italian subtitles switched on throughout and piecing together what I could using my bad Spanish and the little Italian vocabulary I have picked up from film titles over the years. This is not ideal in any sense but a complete english soundtrack simply doesn't exist so, until some kind soul releases the film with complete english subtitles, it's all we have. And, in any form, this is a film which deserves to be seen.

If you're looking for a more complete version of "Tepepa" I bought one from a SW fan that goes by the handle of "Jerksi" (I can supply you with an e-mail address if needed). It's completely uncut with English subtitles for the non English dubbed parts.

That's good news. I've heard of Jerksi but don't have a contact for him so I'd appreciate an email address thanks. It would certainly be nice to enjoy this film without reverting to my practically nonexistant italian skills.

I'd like to get my hands on that DVD, too.

I'd like to get my hands on this DVD as well, where can I find it?