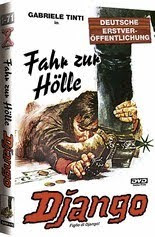 After more than two years of writing these reviews it seemed inevitable that I should eventually tackle the film whose title matches my nom de plume but I must be honest and say I have been avoiding it somewhat as I've always felt it is a film with little of note to discuss. That being said I recently watched a reasonable wide screen version so now seems as good a time as any.

Seeking to identify and take revenge on his father's mysterious back shooting murderer, Tracy, the eponymous Son of Django, (Gabriele Tinti) travels to Topeka City and positions himself between two rival ranchers in a bitter range war. Both ranchers, Ferguson (Gabriele Vargas) and Thompson (Pedro Sanchez) used to be friends with Tracy's father and are the prime suspects as his killer. Tracy does his best to solve the mystery while fending off constant attempts to eliminate him until all is finally resolved in a major shoot out in and around the town's saloon involving every major player in the drama including gun toting preacher Father Fleming (Guy Madison), another of Django's old buddies from the distant past.

The mystery element of this plot is somewhat undermined by the casting of Daniele Vargas as Ferguson. I have yet to see Vargas in anything where he doesn't play the slimy, untrustworthy villain of the piece. Trying to carry off any form of 'Who's the real bad guy?' thread which involves him is akin to rolling out a 'Who's the Mexican bandit?' story starring Fernando Sancho. But this is unimportant in reality. As are all the other machinations we are offered. Once we get past the first twenty minutes or so where it is unclear who the hell we are following at all we know how the whole thing is going to pan out anyway and we are watching not to see who the villain is but how he finally gets his come-uppance. This is fine and as long as you don't expect anything exceptional you are unlikely to be overly disappointed with how Civirani plays it out.

In fact unexceptional is the word which best sums up the film in every area. It's not bad, in fact it is pretty enjoyable on its own terms, but it really doesn't offer anything memorable. This is not surprising as, from top to bottom, Son of Django is a second division spaghetti. The cast, although perfectly adequate, are not from the first tier of talent active in the genre, the director is capable but unimaginative and the budget was such that Civirani doubled as cinematographer as well. A feat which, to be fair, he often elected for in his directorial outings. Guy Madison is probably the biggest name of note amongst those involved which should tell you all you need to know and despite his top billing he is not much more than a fringe figure in the story. Meanwhile faces who usually are mere background performers get some more prominant screen time. Ivan Scratuglia, for example, plays Four Aces, a hired gun who helps our hero out and has the chance to actually act rather than just shoot and fall over. This is all good and such elements actually add to the film's appeal for me. It's also just as well that they didn't try to pass off the aging Madison as the titular son, or Django would have had to be a gunslinger from the Napoleonic era.

The real lead is of course Gabriele Tinti and I must say he carries the part pretty well. Tinti is better known for the plethora of appearances he made in the Emanuelle (note the one m) series of films with his wife Laura Gemser. In fact he made something like a dozen of these soft porn romps whereas Son of Django is his only western. This is a shame as he looks the part of a stubble chinned gunfighter and I think he could have made a success of a longer affiliation with the genre. He certainly brings enough to the part of Tracy to suggest that this could have been the case and among old hands like Daniele Vargas and Pedro Sanchez looked right at home.
The film does have its failings though and a prime example is a bar room musical interlude which is nothing short of dreadful. Ill conceived, badly executed and so out of place it beggars belief as to why it was ever thought a good idea in the first place. It serves no purpose for the plot and doesn't even have an excuse as a character introduction. The lady singer it features is strictly a fringe figure and of no great import to the story. It is just a badly thought out set up and is one of those scenes where you find yourself squirming with discomfort and hoping, not only that it will end soon, but that the rest of the film will not continue in a similar vein. Thankfully it doesn't. But it's inclusion in the film casts a lasting shadow of doubt and leaves a bad taste which takes some time to get rid of. This sort of scene just doesn't fit the genre. Cut an ear off or impale a shooting hand and I don't have a problem. Introduce a thigh slapping chantreuse and I come out in a rash that takes days to wear off. In fairness, the film does recover but my trust in the director was marred and for a picture which is mostly unremarkable it is bad scenes like this which unfortunately linger after the end credits and lower it in my overall estimation.
However, such scenes are not a reason to avoid this film in its entirety. They just highlight the benefits of the fast forward button. For the most part Son of Django is a jolly enough ride. The cast do a good job with unremarkable material, the score is pretty decent and all in all it is a pleasant serving of pasta for any fan in a good frame of mind. It ain't in the same league as the Corbucci original but then it's always a tough ask for a son to live up to the achievements of a famous father.
Posted by Son of Django at 09:08 1 comment: