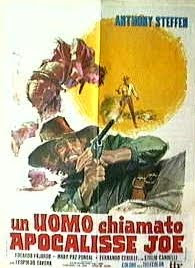 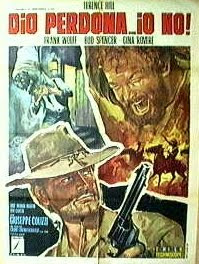 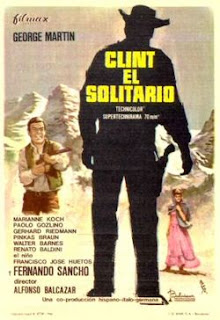 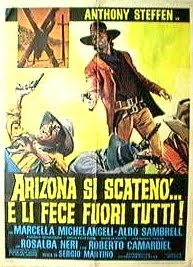 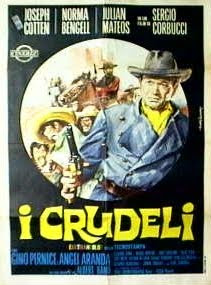 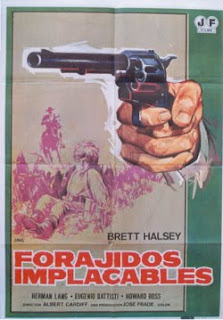 Dir: Alberto Cardone
1968
Alberto Cardone is not the most celebrated Spaghetti Western director. You are unlikely to hear of his films being likened to any of the masterpieces or mostly highly regarded films of the genre. But for a man who consistantly had to work with restrictive budgets he was, in my opinion, a master of making the most of his limited resources. Kidnapping is perfect case in point.
Former sheriff, Fred Leinster (Brett Halsey) has descended into drunkenness after the death of his wife and son in a buggy accident. Easy prey for someone wishing to take advantage of his weakness he finds himself lured into acting as a middle man for bandits who have kidnapped a local woman's son and demanded $20,000 for his return. Leinster collects the cash but he and the gang member sent to direct him are ambushed and the money taken by a mystery assailant. With the bandit dead and the money gone Leinster is left with all sides blaming him for their losses. Realising he needs to fix things fast he sobers up and sets out to return the boy, retrieve the money and clear his name.
This is a simple enough plot but it's played out at a slow and steady pace, low on action but high on intrigue, which allows us to connect properly with the characters and enjoy the gradually increasing tension of the story. The occasional red herring is placed to keep us guessing, to a degree, as to who the real villain is, the hero is flawed and is allowed a series of mistakes and an arc to his character which makes him much more believable and the whole thing is constructed with just enough dialogue to keep things clear without cluttering the thing with unnecessary exposition and gabble. These facets, though seemingly straightforward, are all too often ignored in films at the lower end of the budgetary scale. Directors are sometimes inclined to make up for limited resources by filling the screen time with constant, but pointless action. Fistfights break out and drag on. Men ride endlessly back and forth over open country. Shoot outs occur for little reason and continue for more time than is necessary or enjoyable. To his credit, Cardone rarely descends to such tactics (although his $20,000 on Number 7 is a sad exception) and in this film avoids them altogether.
Another plus for the film is its sparse but effectively used cast. Brett Halsey plays the drunken but moral lead well and his easy screen presence adds to the weight of the film while Fernando Sancho and Germano Longo provide everything required of the principle baddies. Moreover, Teresa Gimpera as Jane, the kidnapped boy's mother plays her part with a suitable degree of dramatic gravitas and looks great into the bargain. Even the young boy is not nearly as irritating as many are in such parts. All in all, the cast are a genuine asset to the film and their performances are all executed.
Michele Lacerenza provides a solid if uninspired score; some of which, predictably, features his own, beautiful trumpet playing. A sound easily recognised by anyone familiar with the ground breaking scores by Ennio Morricone on Sergio Leone's Dollar films. Lacerenza supplied four music scores of his own for Spaghetti Westerns including this one and they were all for Cardone. All of which were decent but none of which threatened the work of the tryue maestri in the genre.
If I'm looking for faults in the film I would suggest that Halsey's character, although admittedly a reformed drunk tends to mess up as often as he succeeds in his pursuit of the boy and winds up with a rope around his wrists or neck with a little too much regularity for the audience to genuinely accept him as a winning character but this is a minor point and possibly over shadowed by the fact that his weaknesses also give him our sympathy and lend him a higher element of realism. Not something which often features large in Italian Westerns. I would also liked to have seen more of Fernando Sancho but then I can never get too much of Sancho so that is also something of a moot point.
I like Cardone's westerns. In fact only the aforementioned $20,000 on Number 7 has disappointed and when his budgets are considered his consistency of quality is laudable. Invariably he manages to add stylish elements to straightforward plots and allows interesting characters to develop while still delivering sufficient and well constructed action scenes. He will never threaten to usurp the reputations of some of the genre's bigger hitting directors but his work was pretty darn good for all that and I for one would rate him in the upper echelons of the less well known or celebrated Spaghetti auteurs. Kidnapping is a fine example of why I like him as much as I do.
The version of the film I saw was an excellent fan dub with a beautifully clean widescreen picture and english subtitles. I'd been wanting to see this film for some time and this copy of it allowed me to enjoy it in its best possible light. Thanks go out to the fellow fan who made this possible.
Posted by Son of Django at 09:44 1 comment: