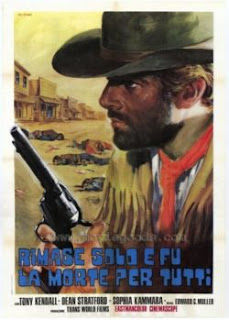 Dir: Edoardo Mulargia
1971
After the sad passing of Tony Kendall I felt I should watch one of his westerns in memory of his illustrious and varied career. In fact I actually watched my own little Tony Kendall double bill, starting with a western, Brother Outlaw and finishing with one of his Kommissar X eurospies, Strategic Command Chiama Jo Walker. Unfortunately for the sake of this review, the latter was far better than the former.

In fact reviewing a film like Brother Outlaw is always going to be problematic. In particular the reviewer is faced with the dilemma of how to approach it in the first place. As an example of the Spaghetti Western in general or just as an example of the 1970s, end of cycle, El Cheapo film which were the death knell of the genre. Perhaps both. As compared to the better films of the genre it is pretty weak but if you are a fan of the films of this period a la Demofilo Fidani and his ilk you may find this an entertaining ride. Maybe.

Dakota Thompson (Tony Kendall) is sheriff of Tombstone. But during a stagecoach robbery in which all his men are killed his life is mysteriously spared while the money is carried off by bandits led by Alvarez (Dean Stratford). On his return to town Dakota is accused by local lawyer Donovan (Omero Gargano) of masterminding the robbery and is sentenced to 15 years hard labour. In fact it is Donovan who is directing the bandits' activities and with Dakota out of the way they continue their nefarious deeds. Meanwhile Donovan forces his beautiful young ward Jean (Sophia Kammara) into an agreement of marriage. All seems perfect for the villainous lawyer but Dakota's brother Slim (Jean Louis) manages to free his sibling from Gaol and the two team up in their quest to sort out the bad guys and clear Dakota's name.

The above is a pretty standard 'revenge for a wrongful imprisonment' plotline and Mulargia doesn't try to complicate matters any by dressing it up any further. In fact, the whole thing is so loose and erratic that I couldn't help but feel that everyone involved had simply gone through the motions to the point of shooting a whole bunch of cliched scenes and then arranging them into a flimsy plot line afterwards. This may sound harsh but consider the evidence. Dakota and his brother turn up at a Mexican pueblo early on asking for the whereabouts of Alvarez. No information is offered in response to their enquiries and as they leave they are involved in an elongated shoot out with various gang members. Soon after, however, they decide to attack Alvarez's hide out while he is busy elsewhere. How did they know where it was? Donovan tells Alvarez to lay low and wait for orders later on only for him to turn up in an ambush immediately after where Slim is killed. Whereupon instead of trying to kill Dakota too he rides off. What the...??? These are just two examples of a patchwork plot that bares no scrutiny but if this was as far as it went I could shrug and let it go. Lack of logic in Spaghetti scripts is a common enough occurrence for me to make allowances for such things. But in this film Mulargia crosses the line into outright sloppiness that builds up into an unacceptable mess.
For instance, a few continuity blunders here and there will not spoil an otherwise entertaining film but when this goes as far as the female lead wearing two totally different wigs throughout the picture, alternating between a shoulder length one with a fringe for interior shots and a much longer, fringeless one for exteriors I can't help but question the level of care taken. These two hair styles were so disparate that to begin with I was unsure if she was supposed to be the same character and at another I wondered whether they had simply used footage from another film to bodge the whole thing together. In truth, I think the actual reason was it was all a bit rubbish and thrown together. Although I also suspected that the interior shots with the shorter wig were shot later, purely for purposes of exposition in an attempt to make sense of the random exterior stuff already in the can.
Mulargia also pads unashamedly throughout. An over drawn out scene like the afore mentioned shoot out is a prime example but, even worse, is the interminable 'waiting for the bank job to start' scene. This time waster lasts almost five minutes without a word being said and is made up of a seemingly never ending series of zooms, close ups and jump cuts which are painful enough but are then compounded by the robbery scene itself which eventually follows and could qualify as one of the most anticlimactic scenes ever submitted to film. Add all of the above to a series of Fidaniesque 'riding between location' shots and you will fully understand what I am on about.
I suppose my biggest problem with this film is that, at the outset, I really wanted to like it. Tony Kendall was a likeable actor and Edoardo Mulargia has made some perfectly enjoyable films along with at least one (El Puro) that I rate very highly. But the truth is that this is one of Mulargia's weakest, if not laziest efforts and Kendall, for all his charm, does not fit well in the western genre. He was far better suited to the campy, tongue in cheek Eurospy stuff and he needed a far better vehicle than Brother Outlaw for him to shine in the saddle. He really doesn't look at home here and doesn't even wear a hat. It's almost as if he knew he was out of place and tried to maintain a more contemporary look despite the trappings of horse, six gun and stage coaches. Whatever the reasonings, Kendall's involvement here was a mistake. The material wasn't the right vehicle for his talents and his talents weren't strong enough to elevate the material.
As I said at the outset, it is difficult to know how best to judge a film like Brother Outlaw. Alongside films from the peak of the cycle, it is horribly inferior. But by 1970, when this was made, the average quality of Italian westerns had dipped markedly. By the standards of its direct contemporaries it is not so bad, but, truth be told, it is still pretty darn poor. It's strongest point is probably its musical score but this is no great achievement either as most of that is lifted straight from Why Go On Killing? A previous film of Mulargia's and one he is far better remembered for.
All up I am glad I opted to watch two Tony Kendall films to honour his passing. If Brother Outlaw had been the only one I viewed it would have been something of a mute tribute. As it is, I will choose to remember him fondly as Jo Walker and pretend for the moment that Brother Outlaw never happened.
Posted by Son of Django at 16:21 No comments: 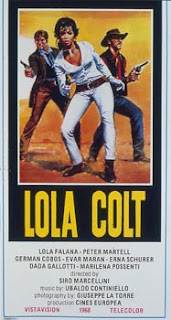