7 Dollars on the Red 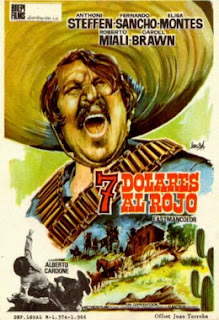 7 Dollars on the Red


Here's an easy test for you.

Get yourself a copy of 7 Dollars on the Red (Called '7 Dollars to Kill' in some places), watch it and then analyse how you feel about it.

If you are not a devoted convert to the spaghetti western genre you will probably be astounded by the gaping holes in the plot, the laughable continuity and the jumpy, fragmented nature of the narrative. The poor editing will be blaringly obvious and the fact that the story takes place over a span of twenty years yet some of the lead characters don't age a day will cause a double take from you of Tom and Jerry proportions. (Anthony Steffen's character not only doesn't age much, he also doesn't change his clothes in twenty years!) All these things will add up for the non convert and leave you with a general impression of crapness.

If, on the other hand, you are a deep down, unshakeable fan of the spaghetti western you will dwell on the moody, downbeat final showdown and the gutsy, hook flailing duel between the hero and the bandit chief. You will have a sense that the soundtrack by Francesco de Masi was top notch and probably worthy of a soundtrack purchase at some point soon. You will delight in the over the top mugging of Fernando Sancho and feel that the wooden, almost botox induced visage of Anthony Steffen suited the lead character perfectly. Plot holes, continuity gaffs and jumpy editing will be embraced like a naughty but loveable child.

A simple test, but infalible.

In fact there is probably a quicker and easier way to test which of these two camps you fit into. If you know how to get hold of a copy of this film without the help of a private detective and not only know who Anthony Steffen actually is but look forward to his plank like acting style then you are undoubtedly a true spaghetti geek and as a result, a lifelong soulmate of mine.

7 Dollars on the Red is a perfect example of the bread and butter euro western of the 1960's that helped swell the number of these films into the hundreds. In fact, as a product of 1966 it can count itself among a mind boggling litter of about seventy all released in that bumper year. It is unremarkable in most senses but a solid and satisfying revenge flick for all that and well worth a viewing.

At it's core this is a simple 'revenge for a murdered wife' story with the added element of a stolen child to add to the mix. Steffen spends the majority of the film wandering the west in search of the evil bandit chief (Fernando Sancho) who was guilty of these crimes while Sancho raises the child as his own son, ensuring that the final showdown has the added angst ridden element of father facing son. But the real treasures of this film are to be found in its key personel.

Anthony Steffen is not exactly a household name for most people. You can consider yourself a pretty big movie buff in general yet be forgiven for never having heard of him, let alone seen any of his films. But for the experienced spaghetti fan he is a familiar and welcome face. A veteran of the genre, Steffen, or Antonio De Teffe if we are going to be pedantic, starred in something like 25 european westerns during the ten peak years of 1965-1975. Not graced with prodigious acting skills he nonetheless had the right look and feel to carry off most of his taciturn roles with teeth gritted, steely eyed aplomb and is a fond favourite with most us. 7 Dollars on the Red is a typical example. Meanwhile, Fernando Sancho is his usual self throughout, sporting an enormous sombrero and playing the pantomime villain with the gusto we have come to expect.

For those unfamiliar with Sancho, but old enough to remember the British all in wrestlers of the 1960's and 70's, think of Steve Logan (arch nemesis of Mick Mcmanus and co)in a big hat, speaking spanish and you've got the general idea. Long, greasy hair lying lankly across his contorted, blustering features with an ample waistline and a mean streak as wide as 43 bus; I have seen this guy play this role so many times it is difficult to imagine that he had a real life off screen. The idea of his wearing slacks and a roll neck sweater (he must of done, everyone did) and chatting with friends over coffee in an urban cafe is impossible. I'm sure he was just kept in a props trunk between pictures and rolled out whenever he was needed. Anyhow, he is on top form in 7 Dollars on the Red; Gunning down all and sundry with a cavalier air, slapping women around for the hell of it and and generally cheating, stealing and killing his way through an hour and a half with absolute abandon.

On top of all this is some adequate if not brilliant directing from Alberto Cardone and an above average musical score from Francesco de Masi which adds up to an all round decent piece of work. It is no masterpiece, without doubt. But for the initiated, and maybe the keen novice too, it is 96 minutes of pure escapist pleasure.
Posted by Son of Django at 09:55