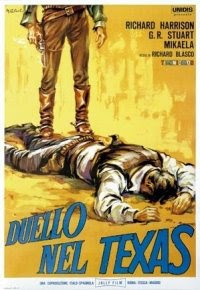 One of the very earliest (if not the earliest) films which can be described as a Spaghetti Western Duello Nel Texas is a very good example of how the european western was about to develop. The style is primarily influenced by the american westerns of the 1950s but this is no slavish carbon copy by any means. Rather, it is a mixture of source influences which vary from the american traditions of the genre to the southern european stylistics of its creators, all mixed up with a healthy dollop of comic book imagery for good measure.

Ricardo Martinez, also known as Gringo, returns home to Texas from fighting in the Mexican civil war and finds his adopted father murdered and family gold stash stolen. Gringo sets out to hunt down the killers and, as a result, crosses paths with Corbett, the local sheriff, Steadman, the saloon owner and two general no goods, Zeke and Kincaid Wilson. He also rekindles an old connection with Maria, the saloon owners partner which serves to complicate the proceedings even further. Eventually, with the help of his adopted brother and sister Manuel and Elisa, Gringo eliminates the parties responsible for the old man's death and faces off with the gang's leader in a textbook main street duel.

Ricardo Blasco (not even a household name in his own household) does a creditable job in the director's chair on this film although reports that Mario Caiano took responsibility for some of the direction makes it a little difficult to say how much each man should take credit for. The presence of Leone's cinematographer, Massimo Dallamano, behind the camera would also have added depth to the skill base and clouds the credit waters even further. Either way the film moves along at a good pace and there is a nice balance between action, drama and light relief with some effective framing at key moments. The final showdown between Gringo and Corbett is particularly well constructed and would fit easily into any post Leone western's format. Dramatically framed and drawn out to maximum effect with Giacomo Rossi Stuart performing almost grotesque death throws this is classic Spaghetti stuff.

Richard Harrison also performs to the top of his game and brings just the right level of presence and charisma to the role of Gringo. Harrison put in some good performances over the span of his considerable western career (Vengeance in particular springs to mind) but he is sadly remembered more for his poor films than his better ones. He is also, of course, remembered for turning down the lead in Fistful of Dollars and suggesting Clint Eastwood for a role which changed the whole face of westerns, not just in europe, but around the world. But forget all that, he brings something genuinely positive to Duello Nel Texas and he carries the film with real assurance.

That is not to say that Harrison is a one man band in the acting department here. Far from it. Giacomo Rossi Stuart plays the corrupt sherrif with some skill and Mikaela is almost Rosalba Neri like in her portrayal of Gringo's old squeeze, Maria. Her internal anguish and wrangling with the part she played in the events surrounding old man Martinez's death are handled with passion and complexity. It is also nice to see an early bit part for Aldo Sambrell as gang member, Garolo. A short lived part that ends in a violent death of course but then Aldo made such parts his stock in trade as the next few years unfurled.

Duello Nel Texas also boasts the first western score for musical maestro Ennio Morricone. Not one of his greatest by any means but it works well enough and the theme song, "A Gringo Like Me" reaches such high levels of cliched kitsch that it has become a veritable classic of its type. So corny that you can't help but love it.

This is by no means one of the great spaghettis of all time. But when compared to other films of the genre made prior to the explosive success of Fistful of Dollars it is a film of genuine quality and stands out as an example of what was just around the corner for european westerns. On the surface it appears to be constructed along traditional american western lines but with a little closer analysis it can be seen as very much a film with its heart in the mediterranean. Apart from the lead character all the good guys on show here are of latin descent. And even Gringo was raised by mexicans and defends their honour when insulted. The look and feel of the piece is also clearly a much closer cousin to that of the westerns all'italiana made in the next few years than anything created in the USA. There is a surprisingly large body count for such an early western too and some of the twitchy villainy of the Wilson brothers is reminiscant of Kinski at his nastiest.

Duello Nel Texas then, is worthy of a viewing for any fan of the genre but I will add a caveat of warning. I first saw this film as a fullscreen, public domain release under the U.S title of Gunfight at Red Sands and was generally underwhelmed by it. Seeing it more recently in a clear, widescreen version has made all the difference to my appreciation of the film. That is why I have reviewed it here under the italian title of Duello Nel Texas. The italian DVD release from RHV is well worth seeking out and rewards the viewer with a much better experience than that to be had from the cheaper U.S versions available.
Posted by Son of Django at 11:41

Love your site. Great complimentary site to the database site...keep up the good work!