They Call Him Cemetery 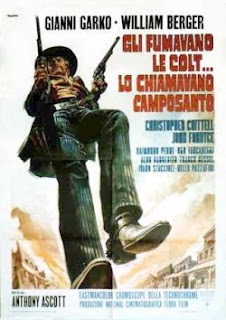 1971 was a crossroads year in the Italian Western cycle. With the most creative and successful years apparently behind it the recent large scale success of the first Trinity film seemed to offer new hope for the genre. But the Trinity formula was a very different animal to that of its predecessors. It took a genre already well swathed in irony and led it across a dangerous line into open parody. It was a step which attracted a large new audience but also alienated many existing fans for whom extended fist fights and obtuse clowning was everything they didn't want in a western. However, the Trinity Express was far too powerful a train to ignore and more and more films followed its style over the ensuing couple of years. Some embracing its comedic style whole heartedly, others borrowing some of its lighter elements and enmeshing them in a less parodic way. Giuliano Carnimeo's They Call Him Cemetery is a film which, although occasionally flirting a little too much with the comedy elements, maintains a balance between irony and parody as successfully as any. Walking the line skillfully between the two and delivering an enjoyable adventure film which offers an opportunity for a great screen relationship between two of the genres favourite sons; Gianni Garko and William Berger.

The McIntire brothers return home after an eastern upbringing to find their crippled father and his fellow ranchers under the grip of local racketeers who are bleeding them for protection money under threat of violence. The brothers, full of moral fury but ill equipped for a town addicted to the gun, confront the bad guys and make themselves targets for the mysterious gang leader who keeps his face covered and enlists the services of a paid gunman to eliminate the new trouble makers. Unbeknownst to all, another gunman has arrived. A stranger who seems to have the welfare of the brothers at heart and who is an old and respected acquaintance of the racketeer's newly hired man. The two gunmen spar around each other, attempting to serve their own purposes without coming into open conflict or transgressing their 'professional code'. Eventually, their torn loyalties can lead them in only one direction and when the brothers discover the racketeer's true identity and where he has stashed all his ill gotten gains a showdown is inevitable. But who will win out and where will the dollars end up?

Garko had already extended the ironical boundaries of the western with his Bond-like, almost supernatural, characterisation of Sartana; first under the direction of Gianfranco Parolini and then Giuliano Carnimeo. With Cemetery much of the look and feel of that successful series was maintained. The ultra cool hero, an element of mystery to be solved, uncanny and seemingly effortless shooting ability all show Sartana's influence but adjustments were also made to accommodate a generally lighter tone and allow for more comedic elements. The two 'greenhorn' McIntire brothers are the most obvious insertions which deviate from the previous formula. The plot of the film primarily follows their quest to rid their father of his racketeering adversaries. Garko's character, although central to the film, is merely the vehicle to their accomplishing this task; bailing them out of trouble, teaching them to shoot and generally watching over them like a guardian angel. Sartana would never have allowed anyone else to dominate one of his narratives quite so obviously. But there is also large amounts of screen time dedicated to the two Mexican servants of the McIntires and it is often through them that the increased comedy elements are generated

This increased comedic content in the film is its one real weakness. Although given a lighter tone from the very outset (an effective scene which includes a sharpshooting Granny and a baby pacified by sucking on a bullet) when Garko's character arrives the 'whacky' sound effects and silly ear slapping he gives a menacing bad guy threaten to send the film over the edge into irretrievable territory. This is a step too far for a Garko character and for a while I was concerned that there was no way back. But, luckily, from then on the line is maintained far more skillfully. Garko's role is centred far more on his relationship and rivalry with his fellow gunman, Duke, while the comedy is contained more fittingly with the Mexican sidekicks and incompetant but well meaning McIntire boys. This separation allows a far better balance to be maintained and facilitates one of the most satisfying elements of the film. The chemistry and rivalry which develops between Garko and Berger.

Cemetery, according to Carnimeo, is a character at once similar to Sartana yet different because he has a social component. Whereas Sartana was always chasing the loot for his own purposes Cemetery has less selfish motives and, ultimately, is acting on behalf of the down trodden in the story. Duke, on the other hand, represents the more traditional, self serving spaghetti figure and this, along with the characters' mutual respect and competitive spirit creates a good natured tension which both actors exploit splendidly. The world weary pair are always composed yet always scheming and looking to outwit each other while simultaneously avoiding a direct confrontation out of an obvious affection felt for each other. Garko summed it up best in an interview when he said that "you get the impression that these two characters already left a great tradition of Italo-Westerns behind." Which, of course, they had. Both in their characters and as actors. This is a great pairing and, for me, is one of Berger's very best performances. Playing the mercenary Duke with a deceptive air of charismatic boredom through which a surprising level of humanity shines. Make no mistake, this is Garko's starring vehicle but Berger completely steals the show.'

It's also worth noting that Bruno Nicolai's score is of the very highest order too. A catchy, yet haunting theme runs through the whole score and proves to be as effective for rousing as well as poignant scenes. And there are plenty of both of these as Carnimeo guides us through a skillful mix of moods as the story unfolds. The rest of the cast perform ably. There are cameo appearances for genre favourites Franco Ressel, Nello Pazzafini, Rick Boyd and Ivano Staccioli (all of whom are always welcome) while the two McIntire brothers are handled well enough by British unknowns Chris Chittel and John Fordyce. British viewers may well recognise Chittel however, as he has been a long standing regular on popular soap opera Emmerdale for some years, playing the character Eric Pollard.
Altogether, Carnimeo delivers a very solid mix. Working with a good script from Enzo Barboni, the creator of the Trinity films, and utilising the talents of his two leading men admirably he weaves a successful blend based on a predominantly light hearted palette without getting too lost in open comedy or slapstick. He loses his footing at times but recovers well and the end result is an enjoyable if undemanding ride. If you like your spaghettis on the lighter side this is a must see. And even if you are more a fan of the darker sort (which I certainly am) this may well be the film which softens your position a little.
Posted by Son of Django at 21:48