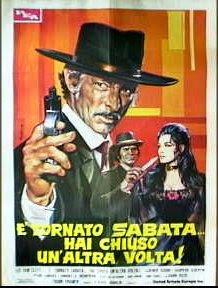 Question: How do you take one of the most enjoyable, if somewhat campy films in the spaghetti western genre and follow it up with a sequel which is one of the most tedious?

Answer: I don't know, you'll have to ask Gianfranco Parolini.

For, in truth, I am unable to fathom how such a successful and seemingly straight forward formula apparent in Sabata could be messed up so badly in Return of Sabata while still maintaining most of the creative team that made the original such a joy. Of course, this is neither the first nor last time that such a thing has happened. The history of popular cinema is cram full of sequels which fall a long way short of predecessors and, as such, I suppose I should not be so surprised that Parolini failed in the same way as so many others. I guess that in the case of a film so dear to my heart (as Sabata most definitely is) my disappointment is sharpened that little bit more.

Sabata (Lee Van Cleef) struggles through a complex series of cross and double cross as he attempts to get to the bottom of corruption involving an evil town boss and his partner, the local bank president. Things are complicated for our hero due to the involvement of a long haired and thoroughly untrustworthy but lovable rogue while a pseudo love interest is supplied by a beautiful saloon girl. Assistance is also on hand though in the form of a rotund and rough round the edges local bum and a somersaulting acrobat. Twists and turns ensue until Sabata finally outwits the bad guy and departs with hefty amount of cash.

Astute readers will have quickly noticed that the above synopsis could actually fit either Sabata film. The original and the sequel have identical cores to their plots and personel. They also share significant cast similarities. Van Cleef, of course, appears in the eponymous role in both films, while Gianni Rizzo plays the banker, Pedro Sanchez the town bum and Aldo Canti the acrobat with only minor differences in detail. What's more, beyond Parolini himself as director, both also enjoy the behind the scenes skills of Marcello Giombini (music), Renato Izzo (screenplay), Sandro Mancori (cinematography) and Alberto Grimaldi (producer). So, perhaps, in order to try and understand why this film falls short where its predecesor triumphed, it may be more useful to look at the elements which differ rather than those which remain the same.

In terms of cast, the most obvious changes come in the roles of town boss and long haired trickster. And right away things are starting to get clearer. The original film benefitted enormously from the great talents and memorable screen presence of Franco Ressel and William Berger in these key parts. Ressel as Stengel was one of the great villain characters of the genre. Slimy, elitist and disdainful of all around him he had an almost gothic grandee quality and was a character who, although being camp as all hell, added a bizarre weight to an otherwise flimsy scenario. Berger, for his part, despite smirking his way through the whole piece was genuinely cool and possessed a hint of menace which made him a serious foil for Sabata. Again, despite the lightness of the overall piece, these were characters we could take seriously and their impact on the film as a whole is confirmed by the almost iconic status their images have become. Stengel looking haughtily down his nose whilst sporting one of the most flambouyant comb overs in cinematic history or Banjo rolling in the street firing his deadly musical namesake are pictures which turn up repeatedly. Not just when Sabata is being discussed but the wider genre too. Compare that to their counterparts in Return of Sabata. Reiner Schone, as Clyde, the Banjo equivelant, carries none of Berger's effortless presence. Whereas Berger's character always gave the suggestion that he could take on Sabata at any moment, Schone's is little more than a scheming fool; not only failing at every turn in his attempts to outwit his older adversary but also being in obvious and constant fear of him. He is also far from cool. In truth his beautifully manicured hairdo and moustache make him look more like a second rate lounge singer. As a consequence his position as foil is undermined. He offers no real threat and some important chemistry is lost as a result. Giampiero Albertini, to be fair, has shown himself capable enough in other films but as the main villain, Joe McIntock the town boss, he is being asked too much here. Moreover, for such a central character he gets very little screen time and any chance of us connecting with him or seeing him as a real threat are thereby undermined. What's more, his henchmen are shown to be ineffectual at every turn. All in all, in the area of two key characters, Return of Sabata is playing with a serious disadvantage.

But Return of Sabata's problems go deeper than just missing a couple of key personnel. Something else has gone awry here and it is the general tone of the film. The original Sabata was far from a serious film. It always had its tongue strictly in cheek and a large part of its charm is its kitsch value. Where Parolini went wrong with the sequel was allowing that lighter tone to dominate rather than merely underpin the films atmosphere. This is most obvious in the over use of acrobatics and connected nonsense but is set in place from the outset when the opening scene plays like an episode of The Avengers. Putting Sabata in a sideshow complete with clowns gets everything off on the wrong foot and is all the evidence we need to tell us that we shouldn't even try and take anything that follows seriously. It's a major mistake as the biggest quality of the film's star is his persona of controled meanness. When Van Cleef is obviously playing for laughs we are in serious trouble. He is clearly walking through his performance here and as a result just doesn't deliver in the fashion he should. You suspect he knows it's a turkey and is consoling himself by counting the money.

On top of all this we have a script and story that is just plain poor. The constant twists and turns of the convoluted plot are kind of expected territory for a film of this type and Parolini pretty much invented the formula. But things are taken to an extreme in this film and it doesn't take long before you stop caring. It doesn't help that all these machinations don't cover up the fact that the story is full of holes. Moreover, there are elements which beggar belief even when accepting that the film is no more than a fanciful romp. Annabella Incontrera's character of Maggie the newly arrived prostitute is a good example. She seems to have been included purely to try and convince the audience that Van Cleef was some kind of virile sex god as she does nothing at all except hang off his arm, look at him smoulderingly or inform others that he is giving her bedroom lessons. This may actually be the funniest thing in the film. Unfortunately it's not supposed to be.

I guess you can tell by now that Return of Sabata is not among my favourite films. It's not the worst spaghetti western ever made. That would be unfair. But, for me, it is one of the most disappointing. There were a lot of good people involved in making it and even accepting the problematic nature of all sequels it really should have been better than it is. In some ways I suppose it reflects the general downward trend of the genre which occurred during the 1970s. It certainly is a strong example of my axiom of '60s Van Cleef -Good, 70s Van Cleef - Bad.' (The Grand Duel being the exception which proves the rule) And it's increased comedic levels equally reflect the changing fashion 'Post Trinity'. And for those reasons I perhaps should not be so harsh on it. It is no worse than many other films of its type from the time. But I find myself judging it by what it could and should have been and in that context it is an absolute stinker. So if you are in the mood to see a bit of Sabata style fun, do yourself a favour. Stick with the original. You'll feel a lot cleaner in the morning.

I watched the MGM release of this film which is a big improvement from the old fullscreen VHS I used to have. The picture and sound is clean and bright although, to be honest, the widescreen format is somewhat wasted on such a 'town bound' film. It is a good quality release with, unfortunately, the usual 'no extras' I'm afraid. It's nice to see MGM releasing anything from the genre of course but I do wish they would put their money into something better.
Posted by Son of Django at 19:13

I've never seen this one, but I've always heard mixed reaction on it. I enjoyed your writeup on it.

thanks for the warning. i will bump this waaaay down on my netflix.