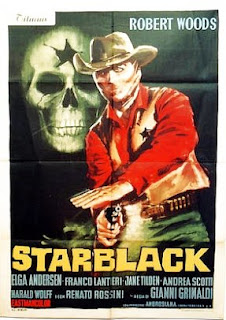 1966 was a time when the spaghetti western was really finding its feet and the style we have come to know and love was becoming engrained in the genre. The pseudo american style was being well and truly left behind and the mediterranean sensibilities that have become synonymous with these films was now firmly established. Starblack then, comes as something of an anachronism. Its look and feel is not just traditional in style but harks back well beyond the 50s heyday of the american B western to an even more simplistic time and plays more like a serial or 'poverty row' film of the 1940s. And yet, like so many spaghettis, just when you think you've got it categorised there's a sting that leaves you wondering.

Johnny Blyth (Robert Woods) and his deaf and dumb sidekick return to Johnny's home town to discover that his father has died and a ruthless banker come saloon owner (Franco Lantieri) is now controlling the town and squeezing the financial life out of all and sundry. Meanwhile a masked vigilante known only as Starblack is thwarting the town boss' nefarious activities and has become a Robin Hood figure to the local people. Johnny, although a popular fellow, has a reputation as something of a coward and when his uncle, who has subsequently married his widowed mother, advises him to avoid any trouble it seems like advice that Johnny can take relatively easily. However, Johnny soon discovers that his father's death was not caused by the accidental means he was first told of but rather by a bullet in the head and so he begins his own investigation into who was responsible. So who is the real killer? And who is that masked man? No prizes for guessing right on either count. This movie is nothing if not predictable in plot development. It is in its mix of styles where the real surprises occur.

From the very beginning of the opening credits sequence you know you are in for a very different ride with this movie than you would expect from a spaghetti western. Starblack, sporting a full face mask (no simple eye covering a la Zorro or the Lone Ranger for this guy), turns up in the nick of time in a series of vignettes showing the local ranchers being terrorised by bad guys. He saves the day, sends the bad guys packing (either back into town or into an early grave) and is lauded with doe eyed wonder by the happy recipients of his valour. In one vignette a grateful woman gazes at him adoringly, clutches her hands to her chest and sighs "Starblack" like some lovesick school girl. The corn syrup is ladeled on so thick here you can almost feel your liver going fatty and it would be understandale to think you had popped the wrong movie into your machine. This can't be an italian western from 1966. The guy in the mask is clearly going to turn out to be 'Crash' Corrigan or Buster Crabbe or some well groomed smiling cowboy who will be doing a song for us before the third reel. Well, you would be wrong. About the first bit anyway. Our hero, amazingly, does get to do a song. But I'll get to that later. The story proper opens and the style continues. When Robert Woods rides into town he has a sidekick in tow and immediately runs into a suspect character who lets us all know he is no good by slapping folks around and generally acting the bully. Woods, moreover, is so well groomed and smiling he could pass for Woody out of Toy Story and is wearing enough brylcreem in his hair to lube the suspension of your car. He goes on to meet up with an ornery old local rancher (Gabby Hayes anyone?) and his beautiful daughter and, just for good measure, shows us all that he is devoted to his mother. Phew! All we need now is for Smiley Burnette to show up and the package will be complete.

But wait. The next thing you know a different flavour is added to the mix and this time it's pure pasta. Despite the clean cut image of our heroes, events take a genuine turn towards the nasty. I've seen a lot of old forties poverty row westerns and, in spite of my admittedly derisive tone above, I really enjoy them. They have a nostalgic value for me as reminders of my childhood visits to the saturday morning pictures and early sixties kid's TV. And in all the movies I have seen of this type I do not remember once a villain getting his hands pinned to a door frame with knives so as to leave him hanging in a state of crucifixion. Johnny Mack Brown or Bob Steele would have cuffed the fellow sternly around the ear not given him a ready made stigmata. This is the twist in Starblack's tail. This is where the 60s italian sensibility comes in. And this is where the whole film takes on a more interesting tone. The juxtaposition of the two elements makes for an interesting experience in that you never quite know which way the film is going to turn next.

Nowhere is this exhibited more obviously than in the scene about two thirds of the way through when Woods, who has been toting a guitar around ominously for much of the picture, finally launches into song in pure Roy Rogers style. This is not such an odd thing for Woods the actor; he made his living singing long before he ever went in to movies, but is genuinely incongruous in a spaghetti western. A genre where you are much more likely to see the leading man get someone in the eye with a knife. But wait, come movie's end the bad guy's eyesight is impaired in just such a fashion!

The key element here is that the overlying style of this film is not just traditional, it is old time hokey traditional. And according to Marco Giusti this was exactly what Grimaldi was after. There have been many spaghettis, especially from the early period of 1963-65, which bore close resemblance to their american predecesors. But this movie harks back much further and therefore its cocktail of hokum and nastiness is something quite unique. As a result, I found it an enjoyable ride but I am well aware that this is not a serving of spaghetti that will be to everyone's taste. The old time style, the romantic subplot, the singing cowboy will all be elements which will put many off who like their westerns strictly downbeat and gritty. This is understandable but a pity as Starblack, when taken on its own terms, is an entertaining and interesting entry into the genre. It's certainly not a fantastic film but it is odd enough, and to be fair, well crafted enough, to be worth a look.

Unfortunately, like so many, this film does not enjoy a good quality DVD release and I suspect won't be getting one soon. Spaghetti westerns have marginal enough appeal as it is without narrowing the potential audience down further by going down the Gene Autry route. But I'd like to see it get one anyway and we can always live in hope.
Posted by Son of Django at 11:57

Through sheer coincidence, I happened to watch this and JOHNNY HAMLET the same week. Both have the exact same plot, as both are remakes of Shakespeare's HAMLET.

Yes, I saw the Hamlet motif in Starblack when he returned home to find his father dead and mother married to his uncle but that seems to be where the similarity ends. No ophelia like figure, no play within a play and no brooding prince. We do get a skull of course but it ain't Yorrick's! No doubt about Johnny Hamlet though. That's a Shakespeare remake for sure. And a great film too.