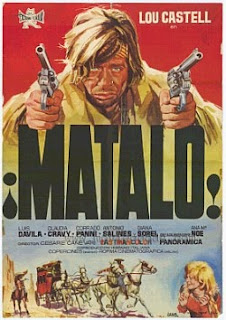 An outlaw is rescued from the hangman's noose by a band of Mexican bandits but once safely out of town our bad guy murders his saviours and holes up with a couple of old partners in a ghost town and plans a stagecoach robbery. They are joined there by one of the partner's girlfriend and an element of sexual tension is added as all the boys take a shine to her. During the stagecoach job the previously rescued outlaw is knocked off and the remaining villains go back to the ghost town to lay low for a while. During this time one of them hides the loot to keep everyone's hands out of it and a pacifist drifter and recently widowed woman arrive in the town by chance. Nastiness ensues and things are complicated further by the discovery that an old woman has been living in the ghost town all along; dreaming of rebuilding it to its former glory and figuring the stashed loot will go some way to financing her plans. All eventually comes to a head when the drifter escapes from his ropes with the aid of his loyal and somewhat aggressive horse and our original bad guy shows up, alive after all, to claim the loot for himself.

Sound familiar? Well if you, like me, had recently enjoyed the pleasures of an earlier spaghetti entitled Kill the Wicked, it certainly will do as this plotline is identical in practically every way. What's more, if you check the scriptwriter credits on both films you'll find they were both written by the same guy, Mino Roli. So he managed to sell the same story for two separate films. Nice move. But then nothing surprises me too much with Spaghettis. Or Italian genre films in general to be honest. The question really, I guess, is does the second film offer anything better or at least sufficiently different from the first. And the answer to that, for me at any rate, is yes...and no.

For all its similarities of plot and character, Matalo! is most definitely a very different film to Kill the Wicked. In fact it is very different to just about any other Spaghetti Western I can think of. Predominantly because, in an era of psychodelia, this film is the one which offers the most overt marriage of Western and Hippie conventions. In short, it's something of a trip. Only with big hats and horses.

The first thing which you are struck by is that for the first forty five minutes; a full half of the entire film, no one (apart from some initial mutterings from a priest) is seen to speak. That is not to say there is no dialogue. But that no one is ever shown speaking. Either the character speaking has their back turned to camera, or they are in a long shot or, often, are offscreen altogether. Apparently Canevari intended to eliminate all dialogue from the film except for the single order, Matalo!, which makes up the title. He doesn't manage quite that level of silence but the dialogue proper only really kicks off once Lou Castel's pacifist boomerang wielding character arrives in town. This change comes as quite a jolt after so long with few words and makes the film somewhat disjointed as a result. I would have prefered to see them stick with the largely silent approach. Apart from anything else, little is actually said of any real consequence. Only the explaination of why old Mrs Benson is still in town needs any clarifying words. The rest would work just fine in pantomime. In fact, for me, it is this lack of follow through which is the film's biggest fault. Strange to say, for a film that is as whacky as this in many ways I don't think it is quite whacky enough. I felt like it went to the edge and then pulled back rather than commiting itself fully. So that despite all the acid rock music and boomerangs it still kept a cautionary and somewhat unconfident hand on convention. A perfect case in point is the use of a misplaced and ill judged voice over injected briefly into the scenes between the outlaw's escape from the hanging and his arrival in the ghost town hide out. This provides nothing. It merely, detracts from the mood which has been deliberately constructed and comes across as something of a cinematic cop out. As if they were afraid we would all be a bit too confused by this point.

On its plus side there are some strong visual performances on show. Corrado Pani looks great as the principal bad guy, Bart. There is a Kinskiesque quality about Pani here. Not just in his facial resemblance but also in the barely controled menace that lies underneath it. (Although to be fair Pani is a little more attractive than Klaus and tends to smile a bit more.) His sniffing the burnt powder smell from his gun after firing is a nice, creepy touch and his heavy lidded, slack lipped look contrasts well to the hair trigger violent nature of his character. It's a pity Pani didn't make more westerns. He could have become a favourite. Luis Davila also played his part well as the more conventional bandit, Phil. In fact, of the three main male protagonist it is Lou Castel, the top billed and better known of all who probably shines the least. It doesn't help that he isn't introduced until the film is fully half way done. The other characters have had time to establish themselves by the time he eventually shows up. But his is also something of a flaky, weak character who spends most of his time crawling around or getting beaten up. And by the time he is ready to take on the villains (courtesy of his aforementioned and more active thinking horse rather than any activity of his own) I had frankly lost interest in him. Things were not helped when he started flinging boomerangs about. I'm sure it sounded like a good idea at the time. Indeed Castel has said it was the factor in the script which attracted him to the role. But in truth it is a bridge too far. Watching gang member Ted (Antonio Salines) hiding around a corner only to be struck down (repeatedly!) by a series of flimsy whirling sticks was, I suspect, far more painful for me than it was for him.

There are more positives however. Visually, the film is always interesting, with Julio Ortas' cinematography showing why he was Mario Caiano's camera chief of choice on so many of his better looking films. His unusual use of focus, or lack thereof, is particularly striking and the film has a genuinely unique look and feel as a result. The score, for all its anachronistic acid rock style works pretty well I think and adds to the atmosphere; injecting a contemporary menace to the piece. Wailing, fuzz boxed guitar solos and driving drums all help create a chaotic soup of unhinged anarchy and I couldn't help but think of Charles Manson's ghost town while watching this. Especially when considering the seemingly hypnotic, charismatic attraction some of the females feel for Bart, a character easily paralleled with the notorious hippie mass murderer. One woman kills herself because of him early on despite him clearly being responsible for her husband's death and then Mary, (Claudia Gravy) the murderous girlfriend of Phil, kills and double crosses on his behalf; risking everything and ultimately giving her life as a result of her devotion to him. Gravy is another big credit for the film I believe. She exudes sex throughout and brings a level of tension and frustration into the ghost town scenes which can be cut with a knife and gives some much needed interest to these sequences. But she also shows a believable vulnerability in her attachment to Bart and this balance in her character makes her role work all the better. She also looked so great in her log fringed hippie, pseudo indian gear that its anachronistic nature became irrelevant. Not something that could be said for Lou Castel's paisley patterned jacket. Although, to be fair, perhaps Miss Gravy's physical charms make me more forgiving in this area.

Matalo! is, if nothing else, an interesting oddity. Its hippie score, fashions and sensibility make it a memorable piece to be sure. But, these factors aside, it is not that great a western. It has positive elements for sure. But if I'm honest and compare it to its identically plotted predecesor, I would have to say the earlier film, Kill the Wicked, is the better, more tightly crafted one. The sixties gimmickery and boomerang silliness, on the whole, detracts rather than adds to the core themes and storyline. In short, Canevari just doesn't get the mix quite right. He goes too far in some ways and not far enough in others in his genre bending and the end result falls short in both areas as a consequence. It could be categorised by some as one of those films that you either love or hate. Tom Betts famously hates it. But, on reflection, this isn't the case for me. I fall well and truly between both camps. I enjoyed it on the whole. Felt it had some real strong qualities in parts but felt a little let down overall by some of its failings. It's well worth seeing for all that. But for me, if I'm in the mood for a whacky Spaghetti ride on the fringes of Bizarreville, I'll stick to Django Kill!

The version I watched of Matalo! was the Wild East edition. The picture and audio quality are not quite in the Koch Media league but it is very watchable none the less, is well worth getting and includes an interesting little interview with Lou Castel to boot. Their tongue in cheek dedication of the film to Tom Betts is also a nice little in joke which raised a smile for me.