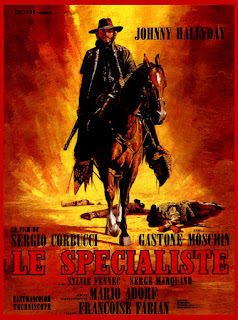 Famed gunman Hud returns to Blackstone City in search of answers and revenge after his brother is shot and lynched following a robbery on the local bank. Was his brother guilty? What happened to all the stolen money? And what the hell are these hippies doing in the 19th century American west? Safe to say only two of those three questions get in any way answered during this, Sergio Corbucci's weirdest western.

Shot amongst the Dolomite mountains of northern Italy this film draws immediate comparisons with Corbucci's earlier, and perhaps best western, The Great Silence. Although visually The Specialists is predominantly green and The Great Silence is white, the snow capped mountains and alpine locations give an immediate feeling of similarity in look and feel. But the parallels run much further. A prime example would be the slightly comic and ineffectual sheriff and the evil banker who are not only key characters in both films but actually share the same names; Gideon for the sheriff and Pollicutt for the banker. In the case of the banker there is an interesting switch of gender with the beautiful Francoise Fabian standing in for regular bad guy Luigi Pistilli but this hardly lessens the obviousness of repetition. Corbucci of course was not averse to repeating himself. The Mercenary and Vamos a Matar Compañeros being the most obvious examples of this. In The Specialists however, they appear more as some kind of generic shorthand rather than an attempt to make the same film twice.

The Specialists is almost a patchwork of elements and tropes seen elsewhere in the genre. The protagonist's chain mail vest reminds us immediately of The Man with No Name's iron breastplate in Sergio Leone's A Fistful of Dollars while the corrupt and cowardly townsfolk hiding dirty secrets could have been lifted straight from Giulio Questi's Django Kill! or even Corbucci's own Navajo Joe. In addition, the construct of having the hidden loot exposed by the rays of the rising sun is so often used it is almost a cliche. The same trick was used in the very same year in J. Lee Thompson's American western MacKenna's Gold but can be dated back as far as Jules Verne's 1864 novel, Journey to the centre of the Earth. All this adds up to a sense that Corbucci was running out of inspiration with the conventional western. He is clearly going over old ground here and there is a feeling that he is going through the motions to a certain degree.

But then repetition and familiarity are at the core of what genre means and when it's done well we really don't mind a bit. When we sit down to watch a western, or any other genre film for that matter, we expect to be reminded of what has gone before. In fact we demand it. What makes us sit up though is when the envelope of familiarity is pushed just a little bit. When the conventions are stretched a touch and some questions are asked. This is how a genre grows and remains relevant for a contemporary audience. It was his ability to do this in previous westerns such as Django and The Great Silence that set Corbucci on a pedestal close to Sergio Leone in this genre. Does he push it again here?

Well, yes and no.

The most obvious veering away from the expected here is with the central position given in the film to a group of hippies. Anachronistically dropped into a 19th century setting they are a jarring statement that this is a film from the 1960s and bring with them a political message aimed squarely at the contemporary audience. And it is something of a heavy handed message at that. Corbucci was on record as saying he had nothing but contempt for the hippy movement post 1968 as he felt they lacked courage and conviction to take real action and effect real change. It comes as little surprise then that the band of hippy youngsters existing on the fringe of Blackstone City in this film are shown in a uniformly bad light. They are vilified by everyone in the town and are humiliated at every opportunity; from the opening scene to the finale. The film's protagonist has no more time for them than the Sheriff or corrupt townspeople and even when they seem to have found their moment it is taken from them in quick fashion. If society is corrupt and needs clearing out then old school leftist Corbucci certainly doesn't see the hippy generation as up to the job.

And it is this somewhat jaded attitude which seems to pervade the whole film. Corbucci visits familiar territory with competence but seems tired of it. He injects a new, contemporary element and then rejects it. He composes one of his wildest and bravest climaxes with society's failings laid bare (literally) and then winds up with the most cliched closing shot of the hero riding off into a massive sunset. Albeit, a clearly Italian, not American one. It's as if he is putting the pieces together as well as always but his heart isn't in it anymore.

This wasn't Corbucci's last western although it often feels like it should be. He went on to make a few more. Two very good ones and one unforgivably awful. But this was his last "conventional" western. If we can call it that given its sporadic weirdness. At it's worst it lacks inspiration but at it's best still offers plenty to enjoy. The location is beautiful if somewhat non-american in look. The Alpine setting made me think of Switzerland as much as anywhere and I half expected Heidi to come running up the hills ringing a cowbell at any moment. The action sequences are as good as you'd expect from the maestro. The cast, even non actor pop idol Johnny Halliday, are uniformly solid. The appearance of always excellent Mario Adorf as the Mexican bandit Diablo is particularly welcome if all too brief. The climax in the street with all the townsfolk laid bare is truly memorable and Angelo Lavagnino's theme music is surprisingly light and catchy. All of which adds up to a couple of hours pretty well spent.

Truth is, The Specialists is a pretty good spaghetti western. It's just not classic Corbucci.


Footnote: For the purposes of this review I watched Eureka's recent UK BluRay release which was excellent. It has had some criticism amongst fans who were expecting a full English soundtrack which was not delivered but, in truth, I would recommend watching the film in either French or Italian anyway. Both of which are available with their respective subtitles on this release. Just make sure you align them properly as, in true Spaghetti tradition, the scripts are different in the various languages. This is most important in Mario Adorf's final moments where his dying words are complete opposites in the French and Italian dubs.