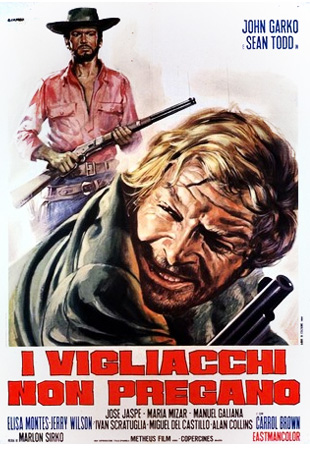 Mario Siciliano directed three westerns amongst a variety of other genre efforts.  Two were only memorable for their lack of quality.  Cowards Don't Pray is a different beast entirely and proved that with the right material and cast Siciliano was capable of much more.  Sadly, he never made another film of this quality but I'm happy to cut him some slack. Making one good one was hard enough and Cowards Don't Pray is a good one.

Bryan (Gianni Garko) comes home from the war only to have Yankee vigilantes invade his home, brutalise his wife and leave him for dead.  He is taken in by Daniel, another veteran (Ivan Rassimov), and the two team up along with Daniel's younger brother Robert (Jerry Wilson) and head west.  But Bryan has been deeply effected by his experience and has developed a new found dark side that leads him away from his moralistic friend and into a more lawless and violent future.  Inevitably, their paths cross again and their differences can only be settled with blood.

With Ernesto Gastaldi working on the script and Gianni Garko playing one of the leads I guess it shouldn't come as such a surprise that Cowards Don't Pray is a good film and yet somehow I can't shake off the feeling that it is far better than it has any right to be.  Gastaldi and Garko aside, a film which is far greater than the sum of its parts.  Siciliano not only never made another spaghetti western of this quality before or after, he never directed a better film, period.  And yet the direction is assured here and constantly features interesting visual decisions while keeping the narrative flowing throughout.  Similarly, the cinematographer, Gino Santini and composer Gianni Marchetti are far from household names even among the closed world of Italian movie fandom but their work here is excellent.  And everyone else is right on their game, from bit parters to secondary leads.  No one seems to put a foot wrong.

The story is a good one if somewhat formulaic and pays a hefty debt to the Pat Garret and Billy the Kid legend as it goes on but at it's heart is a straightforward revenge flick with the added quality of a friendship gone bad and the tragedy of a character traumatised by experience who lurches to the dark side as he loses his grip on his sanity.  Garko is excellent here.  Although never averse to taking risks as an actor he is playing largely against type and manages to evoke the sympathy for his character required to elevate the piece from action drama to tragedy.  Bryan always does the bad thing but we sense the good buried within him and root for his redemption even when we doubt it will ever be possible.

There are also some stand out and memorable scenes here which more than make up for the occasional clunky dialogue.  The opening scene is a good one and sets the whole premise up well.  And the closing sequence in the railway tunnel is first class, delivering a tense action finale with the emotional release the film deserves and the characters need. I could have done without the two staged shoot out competitions which both felt unfittingly contrived but they were well enough played out and are rare slips in an otherwise sure footed narrative.

I've been on a bit of a Gianni Garko kick of late, watching all his films together over the past two weeks.  Although he will be forever thought of as Sartana, a character he made his own in four very entertaining films, he also gave some excellent performances in other films and few (if any) are better than this one.  $10,000 for a Massacre is in my view the best western he ever made but Cowards Don't Pray runs it a good second and may well be his best performance of all.

The version of the film I watched is included in the 4 film Italowestern Enzyklopadie DVD box set from Koch Media.  The picture and sound quality is excellent throughout.