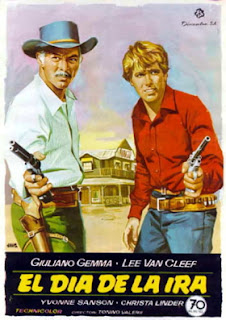 Watching a movie on the strength of the name of the lead actor can be a problematic decision. There are some actors who are relatively safe bets and others who are distinctly more eratic in their choices and performances. Lee Van Cleef falls squarely into the latter camp. As much as I am a lifelong fan of his it has to be admitted that for every classic like The Big Gundown or For a Few Dollars More there are an equal number of turkeys like Bad Man's River and Captain Apache. Thankfully, Day of Anger is no turkey. It features the real deal Van Cleef, complete with gunsight eyes and without any dodgy hair pieces. It also features Giuliana Gemma in fine form and one of the best theme tunes you'll ever hear. All in all, this one is a winner.

The story is a straight forward one. Downtrodden town outcast Scott Mary, (Gemma) pushed around and belittled by the mean spirited elders of Clifton, dreams of getting a pistol and commanding respect from his persecutors. When charismatic gunman Frank Talby (Van Cleef) rides into town he shows some kindness to the youngster and soon takes him on as a pupil/partner as he strives to obtain his own revenge on the same town elders. It transpires that these pillars of the community are not quite as honest and upstanding as they would appear and Talby sets about demanding the $50,000 from them which he is owed by their criminal associate, Wild Jack. Talby soon commands a position of wealth and power in the town but the elders are not ready to give up so easy. What unfolds is a morality tale, of mixed loyalties, two mentors and a poisoned chalice; where Scott finds his revenge but loses his innocence.

Van Cleef is at his very best in this film where both sides of his screen persona are allowed to cohabit the same character. Talby is at once the wise father figure a la Colonel Mortimer from For a Few Dollars More and the self serving villain of The Good, The Bad and The Ugly. He exhibits kindness and ruthlessness in equal portions and the viewer is left guessing to the end which way his instincts will lead him.

Gemma's wide eyed youthfulness is also used to its best advantage here and his performance is second only to his one in Return of Ringo for me; taking us on a journey from innocence to anger to disillusionment during the course of the film.

Comparisons have been made in the past between the storyline of Day of Anger and that of Star Wars and it is easy to see why. The age old themes of pupil and mentor, of a young hero learning to use his natural skills in order to step into manhood, are similar to those at the heart of Lucas' film. The similarities are even more striking when the added dimension of young hero being tempted by a dark path and the power it promises is added; along with the ultimate showdown when he needs to defeat his father figure in order to free himself from the shackles of that temptation. It is possible that Lucas was influenced by Day of Anger when constructing Star Wars (he has stated he was a spaghetti western fan) but it is more likely that both films share a common origin; that of classic mythology where stories of this sort have been told for generations.

And it may well be this universal theme element that makes Day of Anger such a satisfying movie. It is not overly complicated. It is not especially innovative. In fact, it is not outstanding in most areas. But it does work on just about every level you could ask for to a sufficient degree to make its repeated viewing a real pleasure and a regular favourite among fans of the genre.

One area where it is undoubtedly outstanding however, is in its musical score. Or more specifically in its theme tune. This theme, composed by the great Riz Ortolani, is a once heard never forgotten masterpiece of screaming brass, twanging stratocaster and driving rhythm and is used to great effect throughout the film but is particularly memorable during the rotoscope opening credits. I confess I often pop my DVD of this film into the player just to relive the opening when I need a lift. In my opinion it should be available on prescription.

But the music is not it's only treasure. There is a great duel scene where Van Cleef faces his opponent while charging hell for leather at each other on horseback with muzzle loading rifles. There is an excellent cameo from Al Muloch as Wild Jack, Talby's grubby and surly former partner. And there is a well played finale where all the lessons Scott has learned from Talby are retold and used as the young man faces up to his old mentor.

Any way you cut it, this is a Spaghetti with enough to keep anyone happy. Valerii's direction is sound if not inspired, the cast is solid and in good form, the story is satisfying and the music is top drawer. The only down side is that despite it being a regular favourite of most fans it still hasn't had a proper DVD release in europe and the only U.S edition (an excellent widescreen version from Wild East) is now out of print. If you are lucky you may still be able to pick up a copy from an online distributor or maybe a second hand copy on ebay but this film should undoubtedly be more readily available than that. Here's hoping whoever owns the rights to this classic decide to get their arse into gear and give it an official release soon. It certainly deserves it.

Fully agree with your review. This is great stuff. Genre top ten in my opinion.