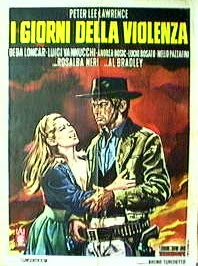 Writing a review of a film which is really good or really bad is a pretty easy process. The film offers plenty of scope to discuss its strengths or weaknesses as they are clear to see and give obvious strands to follow. You start typing and the next thing you know you are the other side of a thousand words and the thing is done. The biggest challenge is knowing when to shut up and bring the thing to a close. But what do you do when the film you are discussing doesn't offer any obvious highs or lows for you to focus on? How do you write an interesting review of a film which is just OK? Nothing more or less?

Days of Violence offered me just such a challenge. It is neither brilliant nor rubbish. It is just alright in almost every way. And that makes for tough reviewing. But, on consideration, I have come to think that maybe it is its very middle of the roadness which is its most interesting quality. Here is a film which epitomises the average Spaghetti. It never reaches the heights of the classic films of Leone, Sollima or Corbucci. But it equally never sinks to the depths of the worst slapstick comedy or Ed Wood hilarity sometimes reached by genre hacks such as Demofilo Fidani. It's just a bog standard revenge flick with a decent cast, ably directed which offers the Spaghetti fan an hour and a half fix of escapist fun. When viewed in that way, Days of Violence is a pretty good film.

Josh (Johs?) Lee lives and works with his brother and sister in law on the Evans ranch and is in love with the owner's daughter Christine. It is the time of the civil war and Missouri, where this story takes place, is being occupied by Union soldiers. The local commanding officer, Captain Clifford, is a corrupt opportunist who is using the situation and his position of power to grab wealth and influence for himself in the region and with the help of his murderous henchman Hank he targets the Evans ranch as a likely source of personal gain. On the pretense of searching for Rebel soldiers he searches the ranch and in the ensuing argument Josh's brother and sister in law are killed. Josh then joins the local renegades and soon becomes a wanted man. During this time Christine has been sent away to Jackson for safety but on her return after the war's end she finds Josh gone and Clifford set up as a local bigwig. Josh returns to find Christine and Clifford betrothed and all hell breaks loose.
This story, based around the 'revenge for a murdered family' plot has a few extra strands to keep it interesting and is embellished by the roles of Mr Evans, a wheelchair bound obsessive who is willing to sacrifice everything for the sake of his beloved ranch, and Butch, the renegade leader who turns out to be more a bandit than a patriot. It also has a pretty strong romantic element between Josh and Christine that runs throughout the film and this is quite unusual in a Spaghetti: Traditionally a genre high on violence and low on love. And it works well here. Peter Lee Lawrence is believable in the romantic lead and he carries off the grittier side reasonably well too while Beba Loncar gives Christine the right level of innocence mixed with intelligence.

Indeed the cast as a whole carry off their parts in just the fashion you would hope for and it is good to see an ensemble of genre regulars like this given decent sized roles to work with. Luigi Vannucchi makes a welcome appearance after his sound work in Johnny Yuma and Andrea Bosic is just as unpleasant as Old Man Evans as he was as Murray in Day of Anger. The only disappointment is that the wonderful Rosalba Neri gets so underutilised as Lizzy the doomed sister in law. We could have done with a lot more from her here as she always adds a hint of gothic melodrama to everything she appears in and if there is a criticism I feel is warranted in this film it is that it sometimes appears a little flat and could do with some spice added to the mix.

That is not to say that Brescia does a poor job with direction here. On the contrary, it is solid work from a director not ranked as anything like the best in the field. Rather that it could have been done with a bit more inventiveness or flair. Which is a pity, as there are moments that show real promise but they are rarely followed though. A good example is the very first shot in the film where we see Neri coming out of the ranch house in the background, framed in the foreground by an extreme close up of Hank's boot on a tree stump. A moment later a knife drops into shot and sticks, upright in the stump. The sense of menace and tension is immediate and sets up the ensuing attack on Lizzy perfectly. But this is an idea in isolation. As the film progresses we rarely get close to such economic and effective composition again. A pity, as it is shots like this that make these films so distinctive and memorable. Equally, the score fails to really deliver any impact. Bruno Nicolai has a fine pedigree and has produced some excellent scores but this one, while adequate, fails to excite.

But, as I said at the very beginning, there is nothing in this film that you could label as bad. Even its poorer elements are not without merit. And it does have some pretty solid pluses. Its problem is that it doesn't do anything exceptional, which, in reality, is not such a big crime. If it weren't for middle of the road films like this the truly great ones would have nothing to stand out from. And it does enough things well enough to keep this viewer engaged sufficiently throughout. And as such, it is a perfect example of its type. There were hundreds of italian westerns made in a ten or so year period between 1964 and 1974 and the vast majority were happy to settle for being just OK. There was a market for such things which these films catered for admirably. And they still do.

As a result, I enjoyed this run of the mill italian oater. Not enough to gush about it, but enough to put it back on the shelf with the conviction that I will be watching it again before too long. It ain't great, but it's good enough.
Posted by Son of Django at 20:35

Good review. I often find that a good portion of these films are the run of the mill/ not great-not bad variety. And they're often hard to write a review for because nothing really stands out as good or bad, so more often than not, I write a rather short review.

Hey, when you get a chance, could you contact me over at my Fistful of Pasta blog (there's a contact page)? I'm getting the full-blown site ready and I wanted to bounce a few ideas off of you via email. Thanks.