A Bullet for Sandoval 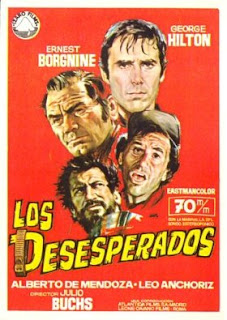 When reviewing a film like A Bullet for Sandoval it is impossible not to be diverted into a discussion of "When is a Spaghetti Western not a Spaghetti Western?" Because the answer in this case is clearly "When it is a Paella Western." That is to say, that despite it's inclusion and acceptance in the general canon of Spaghettis it is, in reality, better described by the Iberian label as it's heart, soul and major influencing factors are firmly based in Spain rather than Italy. In general terms this kind of hairsplitting is irrelevent, in my opinion. The Spaghetti / Euro Western genre has too many examples of cross over and confusion to allow oneself to be bogged down or restricted by pedantic pigeon holing. However, in the case of A Bullet for Sandoval the Hispanic influence is too strong to ignore.

To begin with, the primary personel of the film, from director and scriptwriters to the majority of the cast are all either spanish or latin american in origin. But also, the story is a tragedy in the true sense of the word and following very much the Spanish tradition of tragic drama. Two men are driven by pride and revenge and allow these passions to over rule their better judgements. They are both tragic figures in the traditional sense. That is, great men who fall due to a tragic weakness they are unable to overcome. Such men, in countless Spanish Golden Age dramas, can only find redemption in death and such is the case in A Bullet for Sandoval.

John Warner (George Hilton) is a soldier fighting with the Confederacy during the American Civil War. On discovering that his beloved Rosa is carrying his child and on the point of death he deserts and returns to his Cholera ridden home town to marry her before she dies in shame. In order to do this he must confront her father, Don Pedro Sandoval (Ernest Borgnine) a powerful rancher who despises Warner as a Gringo and has forbidden their marriage in the past. Warner arrives too late. His sweetheart has died in child birth and Don Pedro will not allow Warner to see her. Instead he gives him his baby son and tells him to take it away.

Accompanied by another deserter, Warner sets off with the baby but due to the Cholera epidemic they are turned away by everyone they meet on the road asking for help. Eventually the infant dies and Warner is turned into an embittered outlaw bent on exacting revenge on all who turned their back on him and his child. He embarks on a spree of attacks and retributions assisted by a group of desperadoes he has accumulated along the way until his path takes him, inevitably, and tragically, back to Sandoval.

George Hilton gives one of his better dramatic performances here in a film which quickly shows itself to be far more of a melodrama than an action flick. Despite its opening sequence which follows a Yankee soldier robbing the dead littered across a battlefield, the general tone, especially in the first half of the picture, is one of implicit rather than explicit violence. It is not until Warner's infant son dies and he turns into a cold hearted revenger that the real action is introduced and even here there is a clear policy on the part of the director to show the killer rather than the killed, the aftermath rather than the point of death. This is not an unwavering policy but time and again we see Warner and his men involved in shoot outs with various adversaries only for the camera to turn away before the victim falls and return a moment later to show the corpse or perhaps just his lifeless hand lying next to a dropped pistol. Indeed, the most obvious example of this is in the final scene in the corrida when Warner and his men face overwhelming odds in a 'Butch and Sundance' type denouement. However, it seems to have been applied to gunfights only. When Don Pedro meets his eventual and gorey end it is shown in prolonged detail. A point in the film which consequently stands out as shocking and deliberate in its intensity.

Ernest Borgnine's performance as the bullying pariarch is a solid one too and he exhibits the character's contrasting attributes well. Predominantly presented as stubborn and bitter, in the scene where he breaks down in a passionate lament to his deceased daughter, Don Pedro is also exposed as a man with hidden and tortured emotions. This was, in fact, Borgnine's only appearance in a european western. A pity, as his bear like appearance and ill tempered screen persona lent itself well to the genre and could have been utilised in a variety of roles. As he shows here, he was a good, and often underestimated actor too.

Other contibutors worthy of mention are Leo Anchoriz as the lapsed priest turned outlaw whose screen presence makes far more of the supporting role than would have appeared in the script. Gianni Ferrio who delivered a fine musical score and director Julio Buchs whose handling of key scenes was first class. I have read that italian Lucio Fulci was co director on this project but I am more willing to believe George Hilton who has insisted that Buchs was in charge throughout.

My one criticism of the film would be that it is somewhat episodic in nature. The story seems to jump ahead at times and some scenes arrive unexplained. However, I suspect that these failings are due more to the excessive cuts made to the DVD version of the film than to the original product delivered by Julio Buchs. Unfortunately, despite the version I saw being the best available that I am aware of it is so heavily cut that one of the central characters (Rosa, Sandoval's daughter and the person at the centre of his feud with Warner) does not appear at all despite the actress who played her, Annabella Incontrara, originally having prominant billing. Now I'm not as much of a purist as some on the subject of cuts made to films but it seems to me that it is impossible to take over 15 minutes from a film of under 2 hours without making a major impact. And to cut out a character so central to the drama would be laughable if it wasn't so annoying. It is to the film's credit that it remains so enjoyable despite this butchering.

All this not withstanding, A Bullet for Sandoval is a movie well worth viewing in any form. It is a film with a genuinely dramatic narrative which, in a genre often dominated by action for action's sake, is refreshing and worthy of support. It contains some truly memorable scenes, some of the central actors' best performances and will reward anyone who settles down in front of it. It is also a fine testament to the fact that good westerns made in europe were not just the bastion of the italians. The spanish were also capable of producing first class pieces and exhibit just as much of a national style as their Roman cousins.

But if there is a company out there in possession of an uncut print, do us all a favour and get it released. You will win the undying gratitude of a lot of fans.
Posted by Son of Django at 09:18