A Stranger in Town 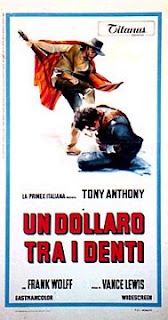 Also known as For a Dollar Between the Teeth (a title that links to an image near the end of the film) this was the first outing by Tony Anthony as The Stranger, a character based heavily on the Clint Eastwood persona from Leone's Dollar trilogy. Followed almost immediately by The Stranger Returns, later by the hybrid curiosity The Stranger in Japan and finally by the surreal Get Mean, this series varied largely in quality but the first two, at least, proved to be solid efforts that overcame the shackles of their largely derivative origins.

Arriving into a seemingly deserted mexican town the Stranger witnesses a massacre of soldiers by the bandit leader Aguila (Frank Wolff) and his men who then proceed to don the army uniforms themselves and await the arrival of a troop of U.S cavalry. Concluding that this act is a prelude to an attempt to steal the shipment of gold being delivered by the troop Stranger ingratiates himself into the bandit's gang and assists them to collect the gold without firing a single shot. This happy beginning to their relationship does not last of course and Stranger soon finds himself beaten and running for his life with only a single gold coin to show for his troubles. Our hero, or rather anti hero, is not about to settle for such an outcome however, and soon turns the tables on his treacherous co conspirators, takes back all the gold for himself and finally settles the score with Aguila, his right hand man (Raf Baldasarre) and their beautiful but wicked partner Maruja (Gia Sandri).

Anthony's Stranger, although clearly based on the Eastwood character is, happily, not an attempt at carbon copying. There are certainly similarities; in costume and taciturn nature, but this Stranger is more vulnerable than the hero of the Dollars films and relies as much on his wits as his guns. This makes for a more interesting character, and fits well with Anthony's more diminutive stature. Indeed, he spends much of the film getting the stuffing knocked out of him and even suffers the indignity of being whipped mercilessly by a sadistic and increasingly aroused woman. Not something you could imagine happening to our man Clint.

Meanwhile, just as Anthony is based on the man with no name from A Fistful of Dollars, the chief bad guy of the piece, Aguila is based equally on Gian Maria Volonte's Ramon from the same film. And like Volonte, Frank Wolff brings a satisfying serving of manic menace to the role and, by extension, to the picture as a whole. Wolff is a genre favourite with many spaghetti outings to his credit and he always brings a touch of quality to anything he appears in. He is particularly effective in the role of a heavy and he performs to his usual standards here. My only criticism would be that he is not given the freedom to extend the character a little further and make him even more compelling. His implied open, if twisted relationship with the trouser clad Maruja is only hinted at but could have yielded far more interest if allowed to be explored further. Likewise, Maruja herself could have been utilised more and injected even more nastiness into the mix. In particular, her sexual ambiguity and predelictions had great potential for further development, not to mention exploitation! Her dominatrix tendencies come as somewhat of a surprise out of left field but at least they are allowed to explode into life when she whips Stranger to a pulp and herself into a state of carnal frenzy. Her lesbian leanings, however, are only hinted at when she leads Chica upstairs and attends to her in a far softer, affectionate fashion. Here is a character with some intriguing contrasts who is largely wasted and could have offered much more than she is allowed.

The final two main characters are Corgo, Aguila's right hand man played by habitual bad guy Raf Baldasarre and Chica, an unfortunate young townswoman played by Jolanda Modio, who finds herself swept up into the drama and, as a result, becomes the victim of the attentions of both Aguila and Maruja before being saved and then left by the Stranger. Both these supporting roles are played well. Baldasarre is always good value and went on to appear in this film's sequel. While Modio manages to maintain her presence while remaining silent for the entire picture. As an attempt to make a more palatable spaghetti western for U.S audiences this film explicitly follows a 'minimal dialogue' approach throughout but poor old Jolanda must have been somewhat disappointed to find she had no lines at all!

This is by no means one the all time great examples of the genre but it is solidly made and the central actors all bring enough to the table to ensure that the film's simplicity does not turn into banality. It is ably enough directed by Luigi Vanzi (working under the Vance Lewis monicor) and the score from Benedetto Ghiglia works well, cementing the 60s cool feel about the picture while coming close enough to a Morriconesque sound to make it pleasing without stooping to plagiarism. The narrative is certainly somewhat slow paced but never to the point of being tedious. On the contrary, it kept me entertained throughout and despite a few inconsistancies (The Stranger using a sawn off shotgun like a sniper's rifle does stretch the credibility a jot) was a solid example of the genre.
I like Tony Anthony's vulnerable hard man persona. It is a good balance, probably best played out in Blindman, but equally effective here and allows his character to be both ruthless and likeable at the same time. He is cool but not invincible and as a result A Stranger in Town offers all the ingredients I expect from a spaghetti but doesn't fall into too many cliches.
Definitely recommended.
Posted by Son of Django at 20:00

Great review, as always (I mentioned it on Fistful of Pasta). I had mixed feelings about it.. there was a bit of 'edge' or something missing from the film (wasn't it produced by MGM or Paramount or something?) Anthony was sort of a wimp, I thought, and at times he seemed to have a New York accent or something that was a bit out-of-place. Not a bad film, but not a top-tier, either.

BTW.. if you get a chance, pls update your link to Fistful..you still have it pointed to the old place at Five Before Chaos. Thanks!!

I didn't see Anthony as a wimp but he certainly isn't presented as being invincible either and I liked that element of his character. He gets kicked around alot and that makes him a kind of underdog that you are rooting for.

And by the way, link to Fistful of Pasta is now fixed. Thanks for bringing it to my attention.